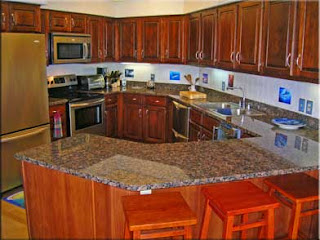 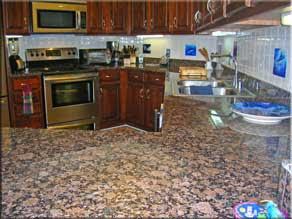 To help celebrate our 20th year in television, Jim Baugh Outdoors TV has just completed it's final additions to the shows new cooking set. This is where many of the cooking features will be filmed along the Hampton River for our 2009 series. 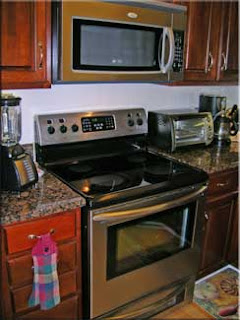 Ever since we started as Fishing Virginia Television Series 20 years ago, our cooking segments have always been a favorite. We have shot many of on location features at restaurants from Florida to Maryland. Many of our older programs that featured our family recipes were shot on location at my fathers house on the river. Dad had an awesome kitchen that was set up perfect for filming. Taking a lot from what I learned about his set up, and many other professional chefs from all over, I designed our new cooking set to be able to handle the most demanding cooks!
We like to catch um, them cook um up quick. So this kitchen is complete with a double oven, (one is convection,) Microwave, commercial grade refidge, and to help clean up our large messes, two drawer style dish washers. Everything is stainless steel and the floors are hardwood.
CUSTOM TILE WITH RICK BOGERT MARINE ART 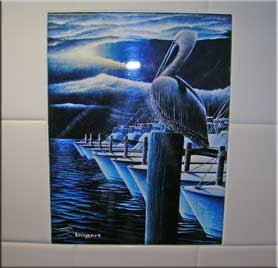 When I was at last years Annapolis show promoting the Hampton VA Booth, I met up with world renowned maritime artiest Rick Bogert for a tour of some of his latest works. I had seen these custom tiles where he would print in amazing color some of his artwork. I thought then, this would be an awesome addition for the new cooking set. A tiled backsplash with Rich Bogert art!! 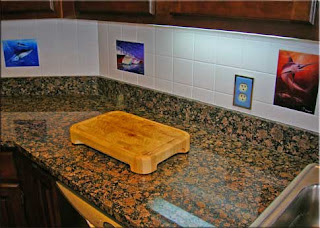 This would be the last addition to the

otherwise "Dream Team" kitchen! So, once the tiles came in, I contacted Jack Hall of Jacks Tile to come in and put it all together. This was very exciting. All the art tiles are custom lit under the cabinets that just has an amazing look.
For more info on Rick Bogert Fine Art click the link below. "See ya in Annapolis Rick!!"
http://www.ebogeys.com/index.htm
Be sure to also check out Ricks' custom offshore Rods. Unreall!!
http://www.ebogeys.com/rods.htm
Time to cook 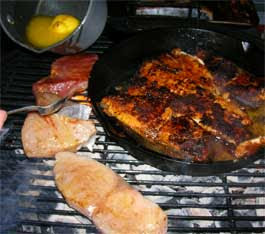 First up on Friday, we cooked up some awesome Tuna, blackened and also made some sesame Tuna on the grill. It was fantastic. Next, we put our steamers to the test!!! I had caught some crabs off our dock and went to Armstead Seafood for the fresh Clams and fresh Shrimp. Also cooked up some Sausage and it all made one great presentation. Look for the recipe for Jim's Seafood Sampler in the Nov-Dec issue of Travel Virginia Magazine 2008. 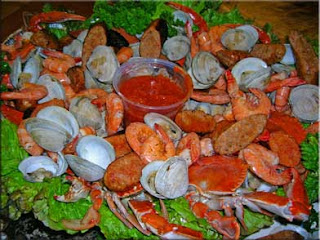 Moving Fronts. We have had a mess with the weather, trying to get offshore has been tough this week, so we will be trying hard to get out next week and get on the Dolphin and Tuna bite. All filming we are producing now will be aired in 2009 for our 20th year broadcast. So far the fishing has been pretty good, but pickin that perfect offshore day has not been easy. Stay tuned for more offshore reports next week.
Tight Lines!
Jim B
Posted by Jim Baugh at 9:59 AM No comments: 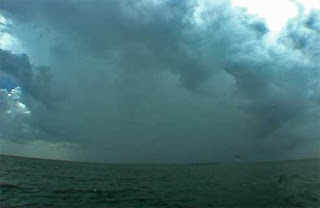 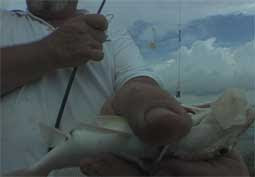 a little bottom bouncing along the Hampton Bar. We knew that tropical storm Cristobal was just offshore, and this low might really turn on the Croaker. The Croaker bite was excellent further up the James around the concrete ships, but with the dark clouds looming, we were not going to risk it.

This our first trip out since putting on the new canvas and our mascot, Tina Turner Baugh was anxious to do a little fishing. Tina now can catch Croaker off the floor of the boat, and put them in the livewell. Not bad at all.

Depending on what the storm did, we were either going to try and catch some bigger fish, or use the smaller ones for bait. What we thought was going to possibly be a great Croaker catch, turned into just a LOT of small fish. They were fun to catch, however as soon as this storm moves on, we will be heading up the James to see where the big ones are at. Todays trip we left out of the Hampton River, fished the HRBT, and all along the Hampton Bar. When we were not running to a fishing spot, we left the engines on idle. All day total we burned about two gallons of gas, and that is running both Suzuki 250 HP four strokes. I think we spent on gas and squid, less than 20 bucks to fish most of the day.
Croaker are plentiful in our area and do taste good fried up. I was glad to see that today's catch also included some Spot. A cooler full of Spot and Croaker will make any frying pan happy.
Next trip--FLOUNDER
JB 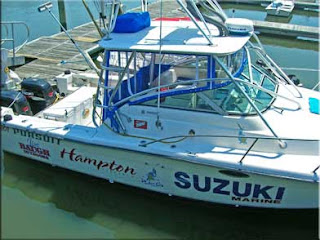 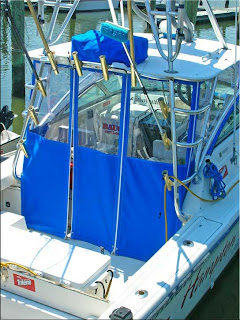 It was about time! We had put on custom canvas by Cooks Canvas in Hampton five years ago and we have put that canvas through a lot of beatings, including Hurricanes. We have since named Phill Cook, "Cook's Cat 2 Canvas". He does a great job and has out fitted every one of our boats including the 36 Trojan. 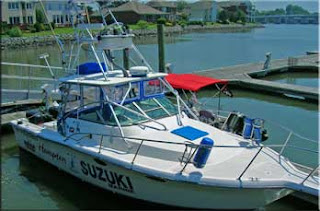 We went with a matching blue to match up with our sponsors logo's, and the old white was hard to really keep clean. The boat looks awesome and is ready to fish out of it's new home on the Hampton River. We should have a bottom fishing report this weekend, we are trying to fry up a bunch of fresh Croaker to go with the bushel of crabs. Great combination!
See ya on the Water in Hampton!
JB 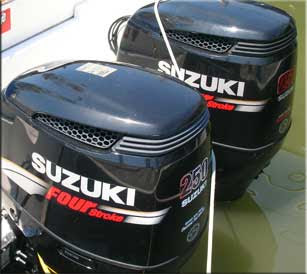 Fireworks on the Fourth of July over the Chesapeake Bay-A Must See! 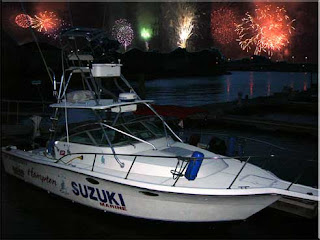 Hi everyone. JB here wishing everyone a great fourth of July holiday. We had an awesome view right of off our balcony of the Hampton\Fort Monroe fireworks show. This was a real treat, and everyone one had a ball cooking on the waterfront barbie while this spectacular fireworks show was booming Right in front of us. Hampton has a lot of fireworks through the summer season. Blackbeard Festival and Bay Days have awesome fireworks shows as well. If you have not had the pleasure of watching a fantastic fireworks show over the water, you need to come to Hampton an experience this, great fun for the entire family. For festival dates and more info just log on to http://www.hamptoncvb.com/

In the top picture, you can see the Hampton Suzuki Show boat is back in the water after about a two month haul out. We had a lot of work done at Sunset Boating Center, many thanks to Cindy and John. (and the new baby of course) The Hot Pursuit got a solid bottom job, worked on the radar, changed the oil in the Suzuki 250's, put in new impellars, and also worked on the AC filters. IN addition, one great cleaning job. She is running great and looking forward to fishing offshore once some good reports start coming in. We got the show boat splashed just in time or the fourth.
WEEKEND OFF 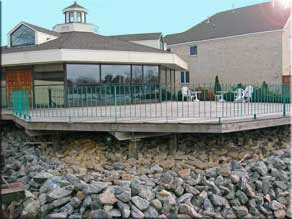 Well, at JBO central we are taking the weekend off, and will be cruising over to Salt Ponds on the Bay in Hampton. Here at the clubhouse and pool, they had a great holiday pool party and the grill never stopped.
"Spirit of America Festival" (in Phoebus)
I got a call and just found out there is a Mustang car show being held in Phoebus right around the corner.

Vette owers are welcomed. This car show is a part of the "Spirit of America Festival" -So-coffee and car show it is, then we will fire up the twin 250's, and hit the water. Might even set out a crab pot today, we are getting some nice Jimmies in the river now. They are all over my dock! Tina Turner got into a bit of a tizzy with a crab this morning. Tina got reminded that those things have claws. Only thing hurt was her ego.

Sunday concert on the beach at Buckroe

Sunday we hope to see everyone on the Beach at Buckroe for the Sunday afternoon Beach music party. We will be there rolling some tape for Jim Baugh Outdoors and enjoying the concert. Weather looks great! Yall come on out! 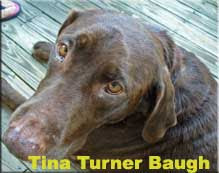 Wishin everyone a happy fourth from JB and Tina!!
Tight Lines
Jim B
http://www.jimbaughoutdoors.com/