Join JBOTV for Thanksgiving 2019 at the Oyster Farm on the Eastern Shore of Virginia!

Make your reservations today for one very enjoyable Thanksgiving. Dine in or out! We will see ya there with the best views of the Bay and fantastic food. Seafood Eatery at the Oyster Farm (757) 331-8660

You can sneak a peak at the link below, we will have everything else up by Jan 1 2020, and we are still in production for 2019.

If you like please leave a comment and let us know what you would like us to produce more of.
Many thanks
Godspeed,
Jim Baugh
JBOTV
Mermaid Bay Productions LLC & Mermaid Bay AIR 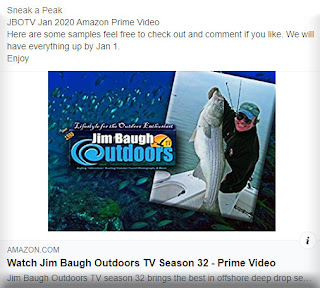 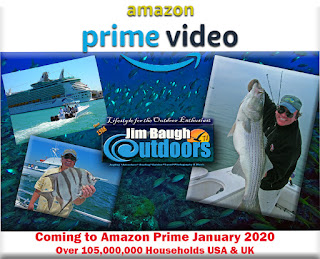 RIP Jerry McKinnis, a true legend of the Outdoors 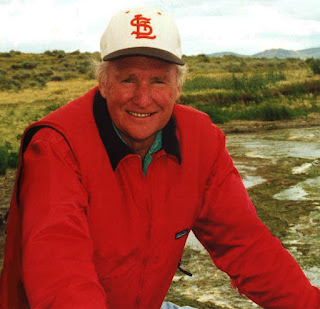 Here we go, when I first started watching a fishing show was now knocking on the door of 50 years past. I may have been only 10 or 11 years old.  What would broadcast on then what the Judge called “The Idiot Box” was an outdoor show called “The Southern Sportsman with Frank White”. In future years, this and only one other outdoor program “The Fishing Hole with Jerry McKinnis” would be the only two outdoor shows I was so enthused about I would actually record them on my VCR and watch them over and over. Both programs in a way would influence my outdoor television career in the years to come. However, while Frank White was an entertaining blow hard environmental advocate, Jerry Mckinnis on the other hand was one of only a hand full of people that started, actually created a worldwide outdoor entertainment and sports revolution, yes an entire industry. Jerry McKinnis was a key factor to the evolution and success of that industry. Jerry also produced his program “The Fishing Hole” for 44 years. That in and of itself is an amazing accomplishment and it was a great show.

He was a member of the Bass Fishing Hall of Fame, National Freshwater Fishing Hall of Fame and the International Game Fish Association Hall of Fame as well as co-owner of the Bass Master Sportsman Society. His production company JM Associates in Little Rock remains a major post house and producers of many television shows and various projects. It was Jerry and his company that was the force behind the weekend outdoor television block on ESPN. This was even before any syndicated Outdoor Networks of which there seems to be dozens of in todays marketplace. So yes… Jerry McKinnis was a BIG deal in the industry of which we probably will not see the likes of again. Jerry was fortunate to be at the very beginning of what soon would be a billion dollar industry and he managed his input with grace, style, and a lot of class.

I first met Jerry at the then AFTMA show back in 1990 in New Orleans. It was a big deal for me because I was such a fan of his show. As busy as he was Jerry took the time to speak with us and I actually spent a couple of hours talking with his associate Jim Manion. Jim gave me a lot of invaluable advice about the television industry and at the time our show was only two (2) years old. So one can imagine what this meant to me. 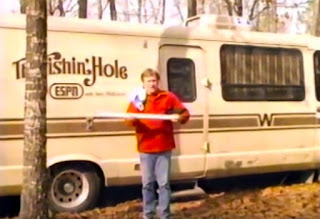 From then on our paths would rarely cross, maybe a trade show here or there, some phone calls from me to Jerry trying to figure out if ESPN would be a good fit for us. It was not, but he was extremely kind to give me the time and info that he did. In the years to come social media would come around and I would keep tabs on what he was up to and of course msg him about his book when it came out. A fine read.

Jerry was a major influence on our outdoor show and in a way that he never knew nor has anyone else until today. People probably would guess that my love for his show was because he would go to these awesome places and catch fantastic small mouth and trout. However the fact is my admiration for his program really had nothing to do with fishing, but everything to do with Jerry and his son Mark. Here are the three reasons why his show stood out so much… at least to me.

1)      Film : Jerry McKinnis shot his show on film. Film is never easy and especially an outdoor show when lighting can be a real bear at times. The fact that his film look just really matched his on air style and certainly bode well with landscape photography. Even when Jerry was on David Letterman Dave mentioned, ”yeah you’re the guy that shoots film”  His show always stood out for that.

2)      Non Commercial: While watching the Fishing Hole you never saw 50 different logos on his shirt or boat that looks like a living billboard. Sure he had sponsor billboards at the top and maybe end of his show but that was about it. Jerry understood the importance of story, and each episode was story telling, not a commercial. This defiantly set the Fishing Hole apart from other outdoors shows at the time.  Also Jerry was just a natural on air talent without a bunch of hype, watching him you just liked the guy. It was easy to do, and people did.

3)      Music: Ok, this is the biggie for me and what has made such an impact on our own outdoor productions that now is going on 32 years. TRUE STORY…  One day I am sitting there maybe 30 years ago watching the fishing hole, it was a good show and then, Jerry takes us on a montage, a journey on horseback through some beautiful canyons and gorges. Meanwhile his son Mark who worked in production at JM Assoc and is an accomplished musician, composed and performed this simple yet wonderful and truly inspiring music. All set to film of people on horseback riding through canyons.

Now, this went on for quite a while. Nothing but images of horseback riding and awesome music. It was so beautiful I kid you not, I got a tear in my eye. Can you believe it? Tearing up watching a fishing show? It was so cool and NOTHING that you would ever see on any other outdoors show. It was to me sort of a National Geographic moment mixed in with a great fishing program.

Well at the time I thought because of this episode I watched, it sorta gave me the license to make our soundtracks a major part of our productions, and we have.
So as one can tell, Jerry McKinnis was a major influence on my career and am honored that I got to meet him. As many people have already written, Jerry McKinnis influence on the outdoor world cannot be overstated, never more true words have been written. A great man, a true legend in the outdoor world.

When Jerry signed his book for me he wrote I would really enjoy the chapter on television. He was right. 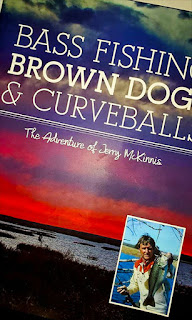 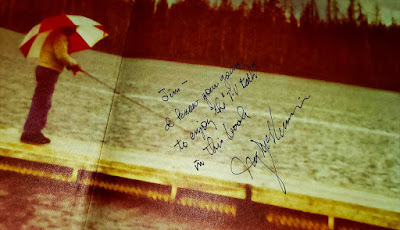 Prayers to his loved ones, Jerry will be truly missed by all that his life touched.

Thank you Jerry, and what a life you led!