"It’s the ride that makes the journey –and we’ve had some wild rides starting back in 1965." ~JB
Join us on a cruise back in time for a look at some of our show boats and equipment we’ve featured during our almost 30 year TV history.
***
﻿

During this 30-year period, companies were bought, sold, merged, or went bankrupt, and some are still thriving –bigger and better than ever. Keeping up with the changing times and technology is not easy in any field. Our experience in dealing with the marine industry has been an ever-changing adventure.

One of my biggest thrills was working with Zodiac. Talk about first impressions. Walking in their corporate office looming over us was a massive oil painting of Jacques Cousteau –WOW! As a kid watching him on TV, Cousteau greatly inspired me. 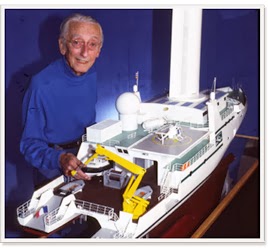 So imagine my excitement years later when I was able to feature the Cousteau Ship Alcyone on our program. I am proud to say we are the only outdoor show ever allowed to film onboard and produce a cooking segment on the Alcyone. The homemade pesto is still one of my favorite recipes, made sweeter by this awesome experience.
We produced several cool shows on the ten-foot Zodiac. We just loved this little boat and landed a lot of Croaker and Flounder in that air-incased hull. We rigged the boat with a 25hp tiller Evenrude and boy it was a flying ride! Only thing missing were the red caps and none of us spoke French –but neither did the fish.

As they say, all good things must come to an end. Once we dragged the rubber boat over enough oyster shells, the leaks far out numbered our time to repair them. The boat ended up housing potted plants at the river house, and then years later given to a very patient friend who needed a hobby. But it sure was a fun ride while it lasted. The shows we produced flying around the in that little rubber boat were some of our most memorable.

The first marine sponsor we promoted was Javelin Boats and the OMC boat group. It was a big deal for us since it was JBO TV’s first national, fiberglass boat sponsor. No longer did we have to fear the wrath of oyster shells. We ran several different Javelin bass boats powered by Evenrude, the first being a 20 foot 396 Javelin powered by a 200 hundred hp Evenrude. This was a roomy ride for a bass boat. Back in the day, 16 to 18 foot bass boats were very popular and a bass boat the size of the 396 entitled one to bragging rights.


The next boat we featured was a Javelin 409 bass boat (above pic). A real screamer with speeds near 70 miles per hour –it’s where I said good-bye to my remaining hair. We also used the 409 in some saltwater applications –just a great ride.
﻿

After Javelin, we were looking for more of a saltwater/bay boat and ended up promoting Procraft for several years. The Procraft 210 was our official show boat powered by a Mariner 200. The boat would fly and was a nice boat for big lake striper fishing and light bay angling. It wasn’t really designed for rough water cruising, but that didn’t stop us as pictured here. Other than taking some waves over the bow, the boat didn’t give us any problems. However since we started producing mostly saltwater shows, duh, we needed a saltwater boat. Our quest for a good saltwater boat manufacture took us on the road to Fishing Ski Barge which eventually led us to Kenner Boats. 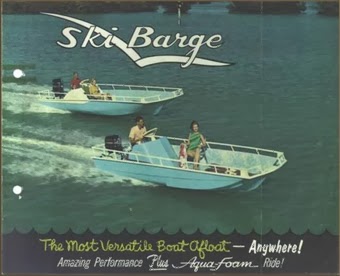 The first part wasn’t so lucky. After we ended up cutting a deal to feature the Fishing Ski Barge on the show, the boat was delivered. Its maiden voyage was almost straight to the bottom of a lake –the hull was cracked big time. Someone clued us in later that the boat had spent its previous life laying in a yard busted.
Soooooo that sponsorship didn’t last long. But the boat’s engine lived on. We put it on a 19-foot Mako that we used as a second camera boat for years. The Ski Barge I gave away to a captain friend of mine, who worked on it but like Humpty, couldn’t put it together again.

On to a well-respected boat manufacture Kenner Boats, run by first-rate boat builders Bill and Gary Kenner. Bill had started building a nice Bay boat, a 23V that was almost 24 feet long, nice deadrise and really did well for a center console design. We had three of these boats, one of which we had custom built to enable us to rig the boat with twin 115 four stokes

This was back around 1999 when we first landed our first four stroke outboard company. From this point on as Suzuki grew in horsepower, so did the boats we featured. At the time the 115 was the largest HP the company produced.

The live aboard
During this this time we were spending so much time in the Hampton and lower Chesapeake Bay area I decided for the company to get a boat  that we could stay on for extended periods of time while filming. We decided on a boat that was the same model as one my father had when I was a teenager, a 36 Trojan Tri Cabin. A great boat with two staterooms, two heads, full galley, central air, ice maker, and twin 350 Crusaders. We purchased the boat in Myrtle Beach and brought it back to the Chesapeake through the Inland Waterway. This was such a comfortable boat I ended up living on it full time for over 5 years. Our show boat the Pursuit would be tied up next to the Trojan in downtown Hampton along with our rubber dingy. The most fun 5 years of my life and lived to write a book about it. 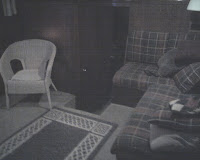 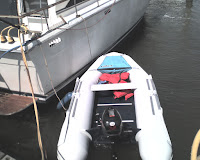 After promoting Kenner Boats for several years we ended up simply purchasing a hull and totally customizing a 28-foot Pursuit with a full marlin tower running station –all fabricated to our spec by Marine Fabricators in Topping Virginia.
﻿

For about 8 years we kept the Pursuit because the boat enabled us to grow along with the new power plants that would soon be available. We started out with twin 140’s, then twin 225’s, then twin 250 hp. The Pursuit was one heck of a fishing machine and a great weekend boat. Our awesome partnership with our engine sponsor has spanned over 17 years.
﻿As the economy changed, basically going straight into the holding tank (and not the one for gray water) so did the marine industry. Back then, when you filled up the gas tank, you could shell out $1200 –easy. Boat builders were closing up shop left and right, engine companies were looking for paddles, and not many people in had the money to keep a big boat afloat. 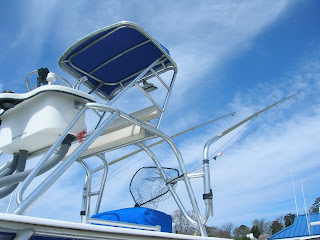 It seemed a no-brainer to start promoting downsizing. This meant smaller, more efficient boats with markedly increased fuel-efficient power plants. JBO TV was the first to devise this custom boat package, along with promoting the first ever GO GREEN FISHING MACHINE! A 20 foot JVX with 90hp four stroke that enabled one to go fishing with a fuel bill that coast less than your bait. No kidding. Most days we did not spend over 2 bucks in gasoline.
The GGFM may have been my proudest show boat achievement. At the time, there were not any other outdoor shows promoting fuel efficiency to this extent. This was also a safe, reasonably unsinkable boat built by the number one largest boat builder in the world, Carolina Skiff Thanks to this boat, people could once again enjoy a day on the water without sacrificing clothes for the kids.
In 2015 we were proud to announce the introduction of Sea Chaser to JBO TV.
One of our first looks at the HFC line was at the 2015 Miami International Boat show. JBOTV filmed several segments at the MIBS that later broadcast on NBC Sports. We featured the HFC line for two years on our program.
﻿
﻿

This exciting boat will be featured in our home waters of the Chesapeake Bay, offshore, and greater mid atlantic area. The boat comes in a 235 Hybrid and a 360 offshore. Jim Baugh Outdoors TV produced an introduction film promoting Tideline and the video received over 42,700 views in just the first few days. During this time the new boat also received over 50,000 page views on JBOTV media including blogs and YouTube Channels. Tideline also was the featured boat in the Jim Baugh Outdoors TV Coastal Angler Column April 2017 issue, annually over 160,000 copies.
The boating public has shown great interest the  JBOTV launch of Tideline Catamarans as they should, it is a remarkable product! 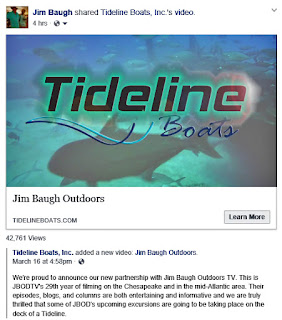 During spring of 2017 JBOTV will film performance test and a factory tour and then offshore segments over the summer. Fall the boat will be highlighted in various JBOTV Tournament films. For more info check out their web site HERE 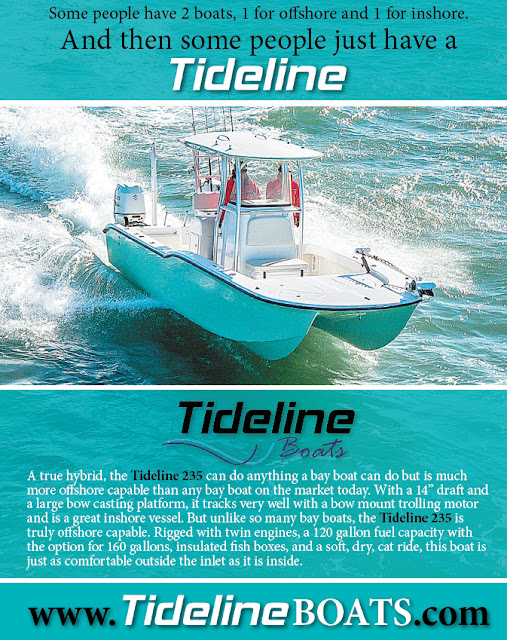 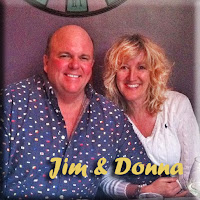 Below pic is our favorite canoe that we have had for over 30 years. I have caught more catfish, bass, and crappie out of this boat than anyone could possibly imagine. More fun than a barrel of monkeys and an excellent go green alternative. Each year we use to host canoe trips down the Dragon Run as well as the , then wind up back at the house for a pig picking. We featured a few shows about this awesome outing that we called the Pig and Paddle. You can watch it here. Great times and something our kids will always remember. 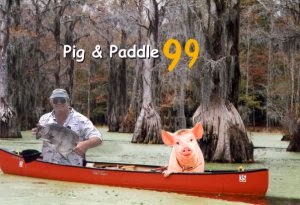 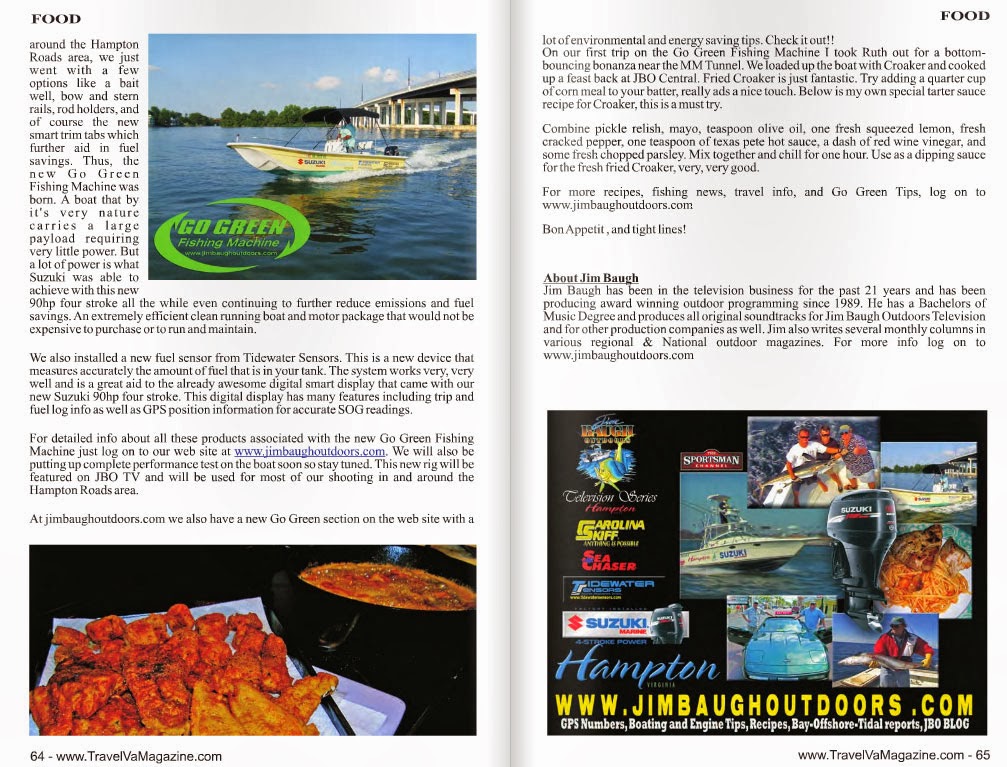 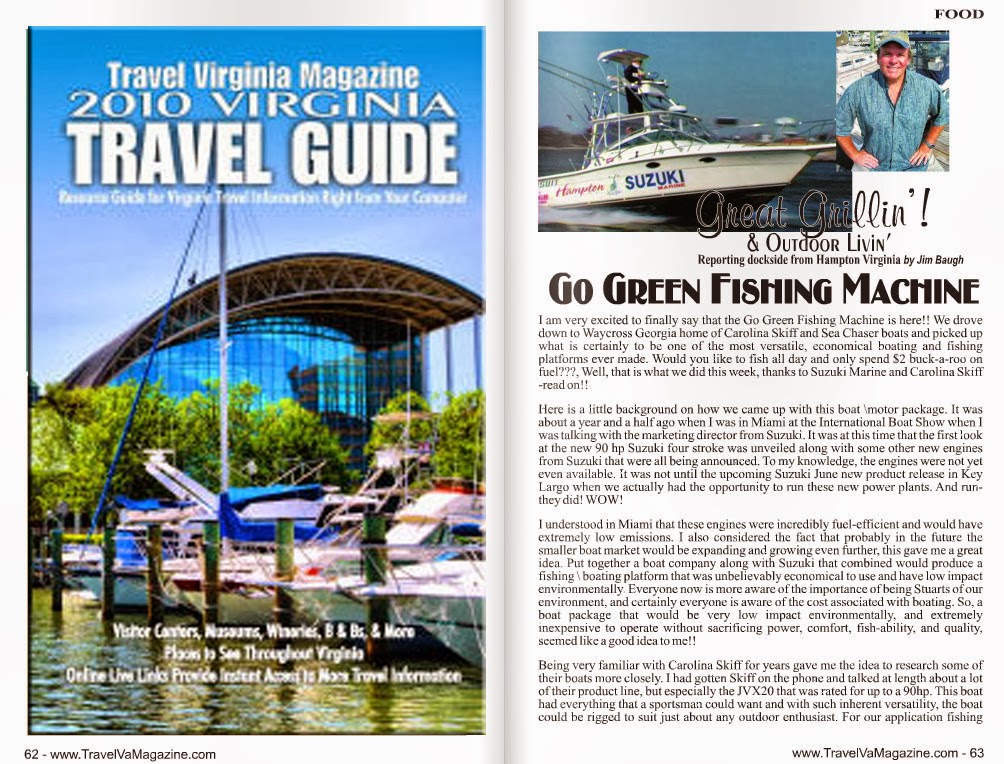 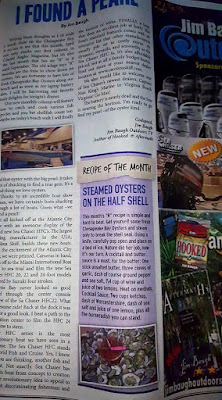 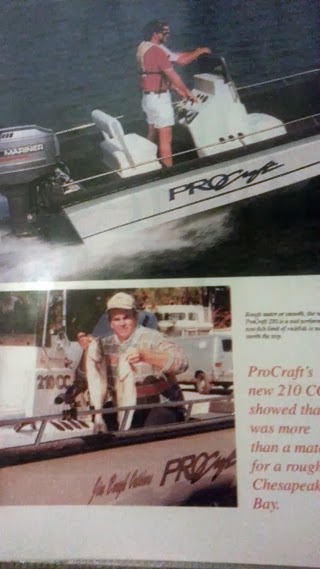 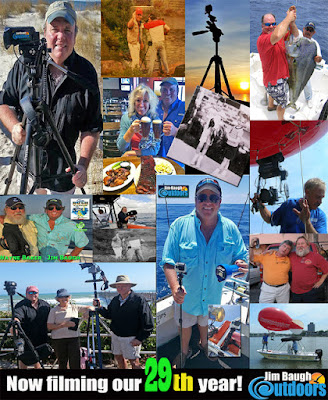 ROXSWELL is available at major online retailers in the United States, Canada and United Kingdom. CLICK HERE to order on Amazon, only 99cents. 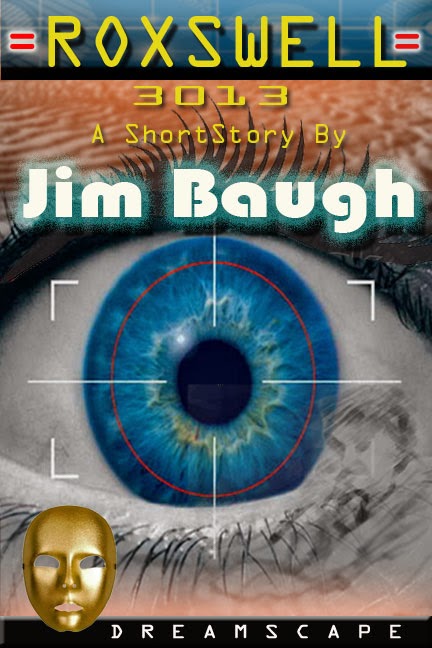 JBO TV Flashback! A look back at the Miami International Boat Show with Suzuki Marine 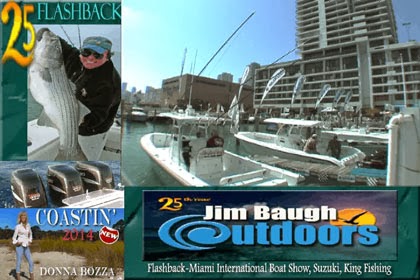 JBO TV Flashback! A look back at the Miami International Boat Show with Suzuki Marine

Here is a special reel we put together of a few of our many past trips down to the Miami International Boat Show. It s always a blast to see what new things Suzuki is up too and the fishing down in the keys is always awesome!

We also included a segment from our King Fishing show filmed out of with Team Suzuki. Great action!!!

The Miami International Boat Show is coming up in February and if your going be sure to stop by the Suzuki booth and see what’s up!! For the latest in Suzuki Marine product and info go to http://www.suzukimarine.com/


Jim Baugh
Posted by Jim Baugh at 9:46 AM No comments: