Offshore Sea Bass Monster Trip!!! One of the BEST!! 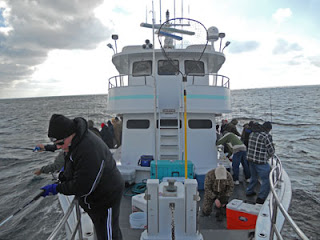 What can I say, one of the best offshore trips ever. We have only had maybe one or two trips offshore for Sea Bass that were equal or better than this one as far as quality of Sea Bass being caught. This trip we had a six-pound Bass, lots of fours and threes. The captain hit a LOT of spots out at the Triangle wrecks and was putting us on fish constantly. There also was some Trigger fish and huge Flounder that were caught as well. 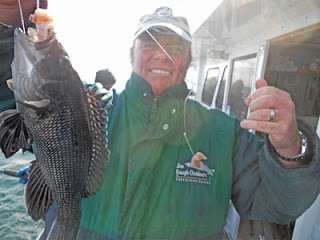 There were a couple of things that made this trip so special. 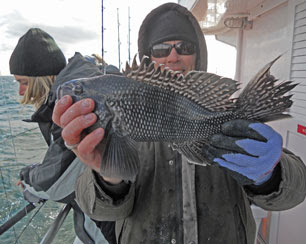 Here is the first: Kevin and Beth came along for some strong Sea Bass pullage and they certainly were not disappointed. However the big surprise was when Beth landed a HUGE 26 1\2 INCH FLOUNDER! This would be her sixth citation for the year with six different species. This means she gets to be awarded an expert angler award by the State. Actually she has more citations than six, I think 9 for the year, and the year is not over yet!!!! WOW! Very exciting for sure! BUT!!!!!!! She was a bit torn on what to do, keep this massive fish which anyone would love to through in the Cast Iron Skillet, or maybe even get mounted. OR- through it back, release the fish, and as a bonus, be awarded expert angler status, which is a big deal for us fisherman. Kevin and Beth agreed to release the fish unharmed, so they threw it back. 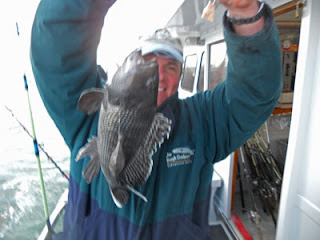 Now this is where it gets interesting, everyone on that side of the boat saw Beth release this huge Flounder back into the sea, and they went nuts! They could not believe that anyone would release a Flounder like that. She did, and it was quite a sight for sure. 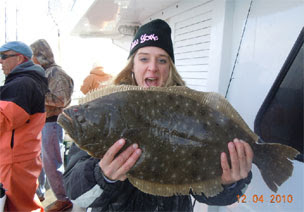 We filmed it, and will be on our show for sure. What a sight!!! What a lot of the people on board did not know was that Kevin and Beth can fill their freezer with Flounder any time they want. They are both very good anglers and have no problem catching Flounder. Good job guys, yall really had them going on the boat yesterday and I was so glad I was there to see that release. WOW! What Fun!! A catch of a lifetime! 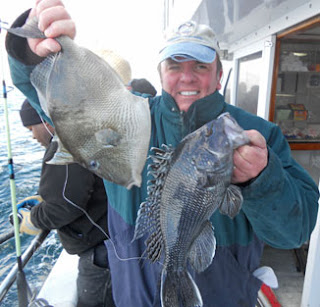 Here is the second thing that was so special about this trip:

The people and crew. I have fished on head boats my entire life, and I will be 50 years old next August. We have always filmed head boats and especially love the offshore trips like this one out of Rudee Inlet. I have never been on board a boat where the entire group of fisherman were so hell bent on catching fish, even to the very last drop. Usually half the fisherman will be sea sick, lounging inside because they don’t feel well, or it is to cold, etc. This is typical of what I see on head boats. 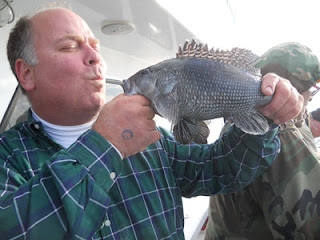 But not on this trip. The boat was packed full and EVERYONE fished their butts off even in the dark with snow flurries, we were all bustin butt getting in every last deep drop. Very exciting, and we all caught a boatload of fish. There was even one elderly lady who could not walk hardly at all on the boat. We all helped her get around so she could fish, and she did. She was right there with us till the end, in the dark, snow, deep dropping. Just fantastic! 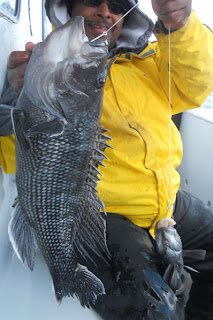 Now, when we film JBO TV I don’t get to fish as much as I like because I am filming and working on the story. My cameraman does filming, and so do I, so I don’t always have a fishing rod in my hands on these trips. Having said that, Mike and I were busy filming the show, yet by the end of the day we still managed to catch 60 pounds of Sea Bass. Mike and I split about 30 pounds of delicious Sea Bass filets. AWESOME! 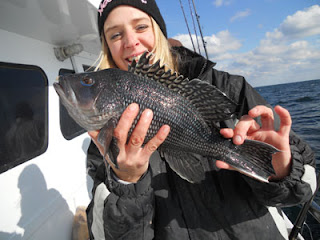 The charter, Rudee Tours was just great as well. Very well maintained boat that even had satellite TV on the entire time we were fishing. Also when we got back, the fish cleaning guys were ready and did a good job at cleaning a LOT of fish. Way to go guys.

The Sea Bass season will close at the end of December, so book your trips NOW!! Only a few charters left, and you don’t want to miss this bite. 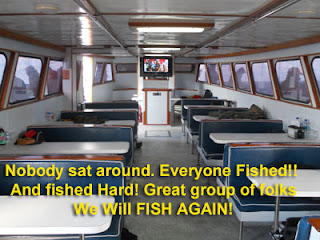 Congrats to all the anglers that went on this trip, we packed the boat pretty good. There was not room for any more anglers I thought, it really was standing room only while fishing. With all those people, there was not a huge problem with line tangles, there were some of course, but a lot less than I thought there would be.
DO your self a favor, book your offshore Sea Bass trip today, you will be glad you did!
Tight Lines and Happy Holidays! 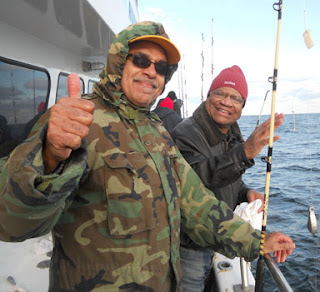 NOTE: Be sure to be checking out our Galley Blog for our upcoming Sea Bass recipes. 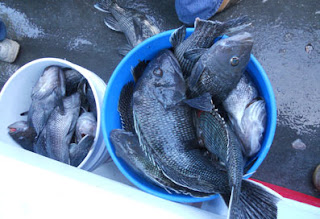 Three Pepper Shrimp Sauce Recipe for Sea Bass, as promised!!! This is the one we talked about all day on the Charter. We are making it again tonight. For the recipe, just jump over to our Galley Blog, FOR RECIPE CLICK HERE 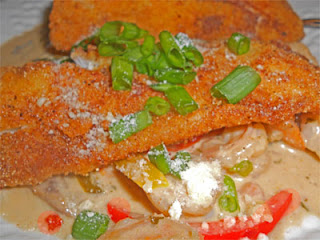