Another five star review for HOOKED 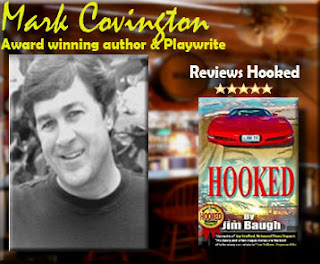 Hooked is the raucous autobiography that follows the life of Jim Baugh from childhood through a series of twists and turns, or should I say nautical tacks left and right, to the present as the producer of and director of Outdoors with Jim Baugh, Ski East, Classic Fishing. Fishing Virginia and, RV Times.

The book opens on ‘A’ dock on the ‘rivah’ in Gloucester,Virginia where Jim spent weekends away from his home near Charlottesville. Jim, the son of a prominent judge, spent his youth boating, fishing and crabbing and learning about life around the Chesapeake Bay. According to the Book of Dead, twin sycamores stand at the eastern gate of Heaven. Throughout Jim’s life heaven has been on the eastern shore of Virginia guarded by a majestic old Magnolia tree. The old Magnolia serves as a symbol of life and as Jim’s touchstone, a broad leafed inspiration Jim taps from time to time to renew his faith. Over the course of the book Jim often returns to ‘A’ dock in his mind to touch base spiritually with the old Magnolia tree which remains a constant reminder of his youth and therapeutic stroll back to the days of ‘A’ dock whenever his soul needs to recharge.

The book chronicles how Jim’s love of magic and music have led him from performing close-up street magic at Kings Dominion and Bush Gardens to producing a world class Outdoors television program. His love of music is woven through the pages of the book through in stories such as Jim as a young man, sneaking into a local church to practice on their piano to forming bands and playing clubs in college and beyond.

The steady stream of hilarious stories in Hooked will keep the reader turning pages in anticipation of the next adventure. Fishing stories abound from filming sailfish during hurricane conditions to bagging a swimming boar as the catch of the day. The characters Jim introduces are larger than life; the frolicking Tennessee boat Captain, the Sailboat bum, the pirates of the Norfolk docks all add to the crazy quilt of Jim’s life on the water. And of course there is a steady stream of beautiful ladies depositing souvenirs in his ‘tip jar’.

From his first kiss on ‘A’ dock, Jim recounts his love of and exploits with women. Jim’s stories of the perilous world of on-line dating are hilarious, touching, and a little scary. The stories take the reader from his first meeting with the woman that would be his first wife, to dating in post-divorce mid-life. His computer dating stories feature characters, such as the D.C Nympho, the trailer park psycho and finally Rose, the woman at the end of his cyber rainbow. In all his adventures Jim has never lost his wonder at the beauty and splendor of women, and he sees each woman that came through his life through those same awestruck, youthful eyes. This comes through clearly in every story.

As I read this book I felt more like I was sitting in a crab shack overlooking the Chesapeake, picking crabs and drinking beer while an old friend across the brown papered table regaled me with stories a salty as the rim around a Margarita glass and as lyrical as a well sung as a sea shanty.

Baugh’s is currently at work on his second book – “Cooked” – which in which Jim will surely delight the reader with more of his nautical tales and stories of life on the Chesapeakebut will also showcase recipes and cooking tips from cooking portions of his outdoors show. I also understand that Jim has opened a bar and Bar-B-Que restaurant in Hampton, so set sail for Hampton, have some Bar-B-Que and a cold brew and pick up a copy of Hooked.