Time for Tuna on the Skiligal!

Back in February 2015, the day started very early for me at this year’s Miami International Boat Show.  My 53 year old bag of bones was up at 2:30am checking equipment and preparing for the drive to Miami from Jupiter FL in heavy traffic. My old camera man and best buddy Wayne and his lovely wife Susan put me up while I was filming in south Florida. After leaving Wayne’s early that morning I met on the docks of Biscayne Bay for our sea trial and filming of the new Sea Chaser HFC line of boats. After which I filmed the interiors of the Miami show and of course product displays and interviews at both the Suzuki Marine and Sea Chaser.


Then, off to film more of the show. By the time I had filmed everything we set out to do it was near 9pm. I heading for the shuttle bus to take me back to the rental car for the hopefully less than three hour drive back to Jupiter. Normally this is like 45 minutes to an hour or so. But with the Icelandic type winter we had experienced, it seemed everyone in Canada and the USA was in Miami during February 2015. Traffic was horrible.
Arriving finally back at Wayne and Susan’s in Jupiter I had fixed a tall cocktail and put on some Jazz piano, The time was near midnight. So, the day filming started at 2:30 am and only started to end at midnight. This is a fairly typical shooting schedule when featuring events. Needless to say that producing and filming television shows for nearly 30 years now, weather I am 25 years old or 53 like I am now, these long days do wear on you.
While I was sitting in the shuttle bus after filming all day I had struck up a conversation with a nice fellow named Abbott Byrd who was sitting next to me. Turns out he was from Virginia as well and turns out he also owns a sportfishing charter business in Oregon Inlet North Carolina called “Skiligal Sportfishing”. Well both of us were pretty exhausted after the Miami show that day, but we enjoyed a real nice chat and he invited me to fish with them. I of course told him we would love to and we had just featured the Outer Banks as a part of our 25th anniversary specials during 2014.
Three months pass and the Tuna are running off the Mid Atlantic! Hey time to go film them while they are here so I call up the Skiligal and see about filming a Tuna feature. The report was good, the fish were here, but so was the weather and the inlet is always a bit sketchy. Hair raising may be a better way to define the entrance to Oregon Inlet. One of the most dangerous Inlets in the world with high surf and a bottom that changes more than a new born baby.
If I am heading to Hatteras you can be sure of one thing, I will be staying at the Hatteras Landing Hotel, now called the Villas of Hatteras. This is always Jim Baugh Outdoors base camp while staying in OBX. The suites are wonderful, plenty of room and the kitchens are great for cooking  and for filming cooking segments.

So we checked in to the Villas and prepared for what would be a fantastic film off of the Outer Banks.
4:30 am was our meeting time on the docks at the fishing center. On inspection of the Skiligal my first impression was that this was one well maintained charter boat. The captain and crew were very professional and the boat had every amenity you could want. These people were on their game and I was very much looking forward to filming and fishing.
The wind was howling fairly decent added to the fact that the tide was almost out plus it was a full moon with an east wind. This all meant possibly treacherous conditions getting out of the pitch black inlet.

The captain informed us of the conditions and told everyone to remain seated until we were safely out of the Inlet. Now you can do the math and quickly see why the inlet is so hazardous. Let’s see, eight foot surf in maybe seven to 10 feet of water with a boat that maybe draws close to four feet and an inlet with an ever changing sandy bottom. Once a boat is slamming down the backside of an eight foot wave, then you are in the trough in some extremely shallow water. Having a 50+ foot boat with full gear and heavy load slamming down on the bottom of the inlet floor is something every captain, and crew, want to avoid.
The Captain was very cautious exiting the inlet taking time to negotiate each wave and considering water depth at every turn of the wheel.
We had made it out of the inlet and the engine roared as it winded up to full cruising speed chasing the dark away into deeper depths as the cloudy horizon broke and the fresh smell of blue water filled the cabin. A sigh of relief from everyone that now there was a wide berth between the ocean floor and the hull of the Skiligal.
Next came a different kind of roar, not from the engines but from the sky above, it was if someone dropped a large bucket full of water that pounded the decks of the Skiligal. Heavy rain and wind did not slow this charter down on bit. We cut and flew through waves like a yellowfin chasing a Sea Robin. 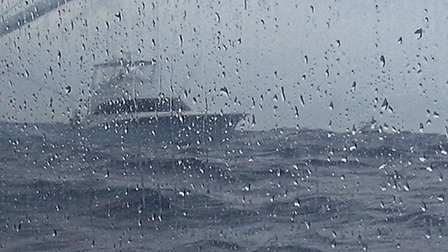 Arriving at the fishing grounds our extremely capable first mate worked the rods as best as anyone I have ever seen. A sure foot and steady hand with knowledge of the sea as if it was enough to call the Tuna to the stern. The confidence of the captain and crew made for a sure bet that we would have Tuna in the boat, and we did.
These were not optimal conditions for Tuna fishing. There had been several moving fronts previous and of course we were fishing right in the middle of one. Thunder storms were all around us and rain came and went throughout the day as if challenged by indecision. The first fish did not come right away and the skunk is always something that is always necessary to get out of the boat as fast as possible. The other caveat is the general rule that if yellowfins are not in the boat by 9am, you have missed the morning bite. However on overcast dark dreary days like these, the morning bite can stretch a lot longer due to low light levels keeping the Tuna near the surface longer.

Not so fast………………………………….
Now, just as the Yellowfin Tuna is at the stern here comes another speedy but larger monster of the sea, the Hammerhead Shark who is looking for a Tuna breakfast! He got it!
So, the first Tuna that would have gotten the skunk out of the boat was eaten by a Hammerhead shark right at the stern of the boat. I think in a way, this could be considered a catch and release. Or maybe at the very least a catch and feed. 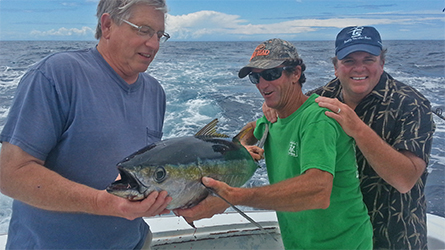 The next two Tuna came rather quickly and we successfully landed both fish and they were in the 30- 40 pound range. We all were defiantly happy to have some fish in the box! The time was nearing noon and two more knock downs but both were throw backs. The amazingly fast mate had all lines straight, back in the water with fresh baits on all rigs.
You know I have found I can learn more about anything, especially fishing, by listening instead of talking.
Our first mate was talking to one of our guest about his lifetime experiences fishing for Tuna and what he has learned.
“Tuna are tricky. You have to give them something close to what they are feeding on. If the Sea Robins are in abundance and that is what the fish are feeding on, you better be fishing with a bird or it will be a skunk day. Tuna have huge eyes and when they are following prey on the hunt for something like a Sea Robin, they will cruise underwater sideways  just under the surface following the flying Sea Robin. The second that Robin lands back on a wave KAAABBOOOOOMMM!!! Surface explosion!! That Tuna is waiting for that bird the moment it lands on the weave….GULP!  The Tuna have that type of speed and timing.”
You know, you can learn a lot from listening to a good first mate. 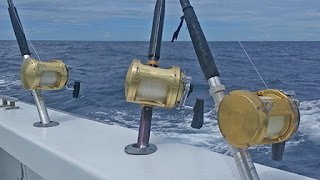 With each passing wave the sky seemed to contrast from light to dark, our deep blue water excursion seemed to be coming to a finale. WAIT! Never fear, more Tuna are here! We landed another in the 35+ pound class and the fish box was looking a lot better. After another hour, we lost what did seem to be a good size Yellowfin. Our mate said it had to be in the 50 pound class of fish. Well, you can’t catch them all and we had a good day under not optimum conditions. It was about that time to secure the rods and prepare for the journey back to the docks.
With the levelwinds at rest and secured for another day the engines revved up to cruising speed and our westward track was rolling forward with a following sea. A following sea, east wind, and shallow inlet. My mind recalled the stories of mountain climbers who have climbed mountains such as Mount Everest or the Eiger. Getting to the top may seem like the Pinnacle. However one must remember, you have to get back down! 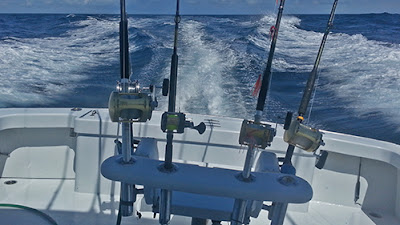 The size of the surf in the inlet looked like mountains to me! Heavy east wind all day made for some exciting surf in the inlet. The captain gave due warning that everyone must remain seated while navigating through a truly treacherous area. I use the word “area” because with the daily moving sand bottom it is difficult to call it a channel. The low tide, east wind, and full moon combination was nothing to take lightly. Unlike the early morning when it was pitch black, sitting in the cabin we could not see the surf. But now in daylight, we can see what the captain has to deal with. 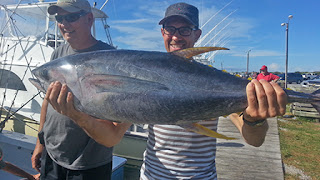 This crew of the Skiligal no doubt can take on these challenges with ease. What a great operation. A fantastic well maintained 52 foot well-oiled offshore fishing machine!
Safely back at the Oregon Inlet Fishing Center Back dockside the fish were cleaned, pictures were takin, and one fantastic offshore journey will now live on forever in our memories.
You can have these memories too!
If you want an exciting, safe and successful offshore experience, contact the Skiligal today. Even on a low tide, full moon, east wind and super shallow inlet….This boat catches fish! 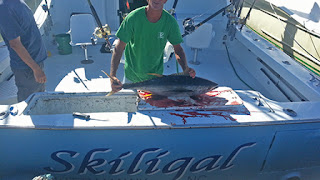 Now, who would have thought that the long 22 hour day of working\shooting at the Miami International Boat Show would have ended up three months later putting JBO TV offshore filming for Tuna onboard the Skiligal.
Had I known that, I would have worked even longer.
NOTE: Look for article in upcoming July issue Coastal Angler Magazine, we have some great Tuna recipes for you and one special one from the owner of Skiligal Sportsfishing Abbott Byrd. Don't miss it! 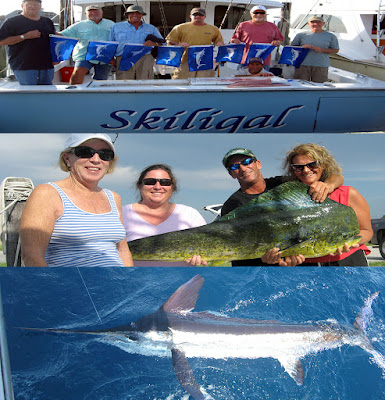 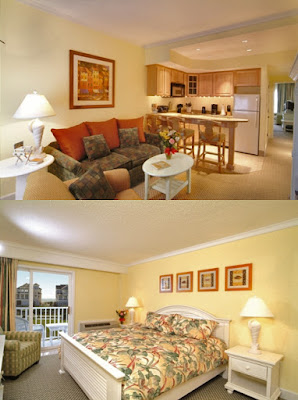 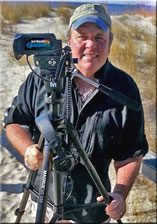 Author of Hooked and “AFTERMATH”