UPDATE: We are proud to announce both Hooked and Aftermath are now also available on Solstice Publishing’s imprint “Solstice Faith”. The Magnolia tree continues to bloom bright! 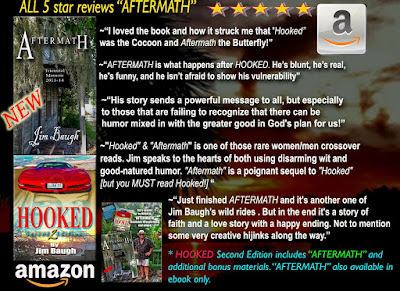 "Hooked” Screenplay is a adaptation
of Jim’s two books Hooked and Aftermath.
Drama/Comedy/Romance 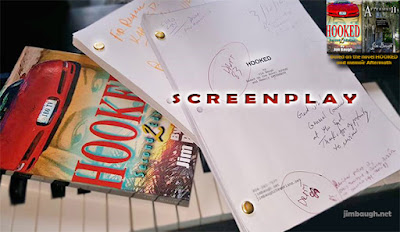 Jim Baugh is also on IMDb.


HOOKED Screenplay: Quotes from Producers, Publishers and Coverage Reviews
“Memorable Southern iconic characters sprinkled throughout--especially the Judge and Tennessee Tim”
“This screenplay has promise as a film that looks at the life and times of a musician who wound up in a career in the outdoors community.”
“It’s Jim’s point-of-view that makes the story (and the nostalgia) work”
“The flashbacks were nicely handled as well the montage sequences that collapsed the chronology—they had a nice visual life to them.”
“The dialogue sounded true to this reader’s ear—who’s lived the bulk of his life in the South.”
“The romantic ending is nice--although Donna seems perhaps too good to be true.”
“A good read especially the site specific VA references and some of the more picturesque characters.”
“A hilarious adaptation of both books Hooked and Aftermath. This film I will go see!”

"Script is well-written, very colorful, and interesting characters."
HOOKED the book: Excerpts from 5 star reviews
(Both HOOKED & Aftermath have received all 5 star reviews since their published premier)

~Author, Joe Jackson, Five time Pulitzer Nominee
“For anyone who’s ever watched a favorite outdoors show and wondered what it would be like to seek one’s fortune fishing or hunting, Hooked is a revelation. The life is everything one dreams – only crazier. Jim Baugh’s account of the boat world – and of the men and women attracted to it – reads like a guidebook to a parallel universe.
~Ralph Peluso, Literary Editor Zebra Press Magazine Washington DC
“Jim Baugh is a unique individual. He is not only the author of the semi-autobiographical book Hooked, but also the host of a long running outdoors TV show. Now, Jim is actively fulling another dream by using his talents to transform Hooked into a screen play. One of the most captivating elements of the book is Jim’s use of quotation’s to frame each chapter. Benjamin Franklin’s quip says it all. “If you would not be forgotten as soon as you are dead and rotten either write things worth reading or do things worth writing.” After reading Hooked 2nd it is clear Jim has accomplished both. He told me he never had so much fun than writing this book and he is equally enthusiastic about the screen play. I wish him nothing but success.”
~Author Frank Allen Rogers
“As a former Floridian, I was aware of some of this craziness, but not what it meant to be carried along in the stream 24/7.  In Baugh’s world, fishing and life are inextricably one and the same. I was immediately hooked by his adventures and misadventures. Bold, raw, revealing, happy, sad, and hilarious come to mind because this story is all of those – and more. Get ready to laugh, shake your head, shed a tear, and laugh again. Get hooked.”
~Author Penny Estelle
“Author, Jim Baugh, has a way with storytelling. In Hooked, a story about his life, he tells it just like it was. I normally don’t read biographies, but I started this story and am very glad I did. The people throughout Jim Baugh’s life are many and EXTREMELY colorful – to call them characters is putting it mildly. Non-stop hilarious stories, with bits of heartbreak peppered in, keeps the reader turning those pages. Read this one – you’ll be glad you did!”
~Jay Stafford, Richmond Times Dispatch Newspaper
Jim Baugh is well-known to many Americans as a consummate outdoorsman. His television series, “Jim Baugh Outdoors TV,” has been in syndication since 1989. Now, in the spirit of “write what you know,” Baugh has published an uproarious novel based (and not so loosely) on his life. “Hooked” (326 pages, Solstice Publishing, $19.99) relates the adventures and misadventures that occur during the filming of an outdoors show, as well as in computer dating.
~Lee Tolliver, Virginia Pilot Newspaper
“His funny and often risqué stories are the kind of tales many can relate to.”
~Author James L Hatch
“I loved reading Hooked. It made me laugh out loud many times, and I found the straight-up presentation as fascinating as a long talk with my favorite bar tender in a cozy little tavern. The story line is definitely five-star.”
~Author Ed Robinson, Leap of Faith Series
“It’s good when anyone can take a humorous look at their own life. Jim Baugh pens a memoir full of quirky characters and life lessons learned. He spends a lifetime first yearning for the “A Dock” of his youth, then reliving it as an adult. Along the way he lets the reader into his heart and soul.”

Chapter, “It Foams at the Mouth”. –The early years.

* From what unearthly demonic poisoned shallow grave did he drag this possessed ugly beast from I will never know. Someone must have sacrificed a goat in a gone wrong satanic ritual somewhere in the neighborhood and then this thing showed up. She made Mommy Dearest look like one of Santa’s Elves.

* “You are not allowed to sit in these chairs, but we are going to have your portraits done and hang them over the chairs.” I thought to myself why not just let us sit in the chairs and skip the portraits.

* Sometimes I thought the only difference between “Rudy” and the “Bitch” was the wheelchair.

Chapter, “Magic Dick and a Woody” –Close up magic years.

* The guy was just a real pill, no fun at all and he also was quite the fem. Whenever he answered the phone at the shop he would pick up the phone in a fem voice and say, “Magic…Dick”.

* Canada’s Cultural Capital of Montreal would be for evermore our favorite Canadian Destination.

* I think Tim and I had a little different perspective of what a houseboat was and his renovation meant that he bought a pool toy at Wal Mart and stuck it inside the shack.

* Now shooting a wild pig and boarding it was not enough for this captain, no, he immediately gutted the pig and cleaned it right there on the boat. He said it was easier to do it on his boat, and he was right.

* Walking back to the front of the trailer on the sofa was the Dominick’s Pizza Delivery guy. I opened the door and outside was his car still running, door open, and now 50 cold pizzas in the back seat.

* I said, “No sir, the only problem I have is that your B & B is 100 degrees and you put chocolates in your guests beds.

* “Damit man!!! Don’t listen to me I don’t know shit about flying an airplane, just photography! Fly the dam plane and don’t listen to a word I say!!’

She said, “Yes. Alcohol. We don’t believe in it or serve it, now what kind of juice would you like?” Respectfully I said, “None. Thank you, I am trying to cut down”.

Chapter, ‘The Pirates are Coming”-The Pirate Life on the Docks

* It is the only helm station I ever saw that was a Knucklehead Harley with a hidden nine-millimeter that also served drinks. Very unique.

* P.D actually had a working still in the bilge of his creaky wooden boat that produced some of the strongest Rum I have ever had. The proof was so high he used it to also clean his diesel engines. He fabricated this still from a marine air-conditioning compressor.

* P. D. Cooper said that he would dance and they would only work for tips as long as they put in a taco bar. That’s right… a taco bar in a strip club.

Chapters, “Dating in the Mid Life”

* She had so much baggage she should have had a retractable handle coming out of her ass and rubber wheels for feet.

* She did not want Nassau. She wanted the Pope and she was not even Catholic.

* Without a doubt, She could be the permanent poster child for the Jerry Spring Show.

* Could you imagine having her as your physician? I’d rather take up Scientology!

* This consisted of a Lava Lamp, a black light, glow in the dark make up, a glowing purple wig, neon spandex purple leggings and a one-piece leopard skin camisole. To top it off she had inserted glow in the dark purple contact lenses over her eyes.

* I was always happy she found a man that could keep up with her. More power to her, her boyfriend, and the Duracell Company.

* A beautiful woman with red hair, ocean blue eyes, awesome body and a tongue named Anaconda that would make Gene Simmons cry for mercy. I sure am glad I met this lady. Things are looking up! 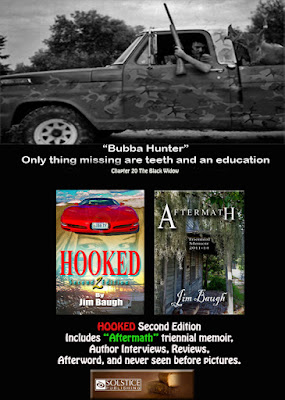