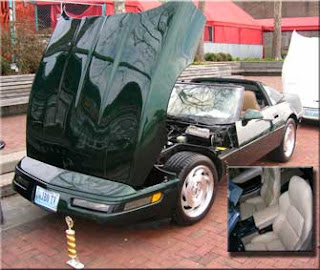 I just got back from one exciting show at Waterside, the sixth annual Vetts at Waterside featured over 120 awesome Corvettes. The Jim Baugh Outdoors 1996 C4 show car was car #107 and we were displayed on the waterfront side near the water taxi. The turn out was very good and there was of course plenty of Vette enthusiast. It was great to meet some fans of our show during the event, we had a lot of folks stop by our car booth.

We had just in time for this show installed the new factory leather interior for the c4. The job really turned out fantastic and was our last major job for this restoration. The show vette is ready for it's next Key West tour commin up in May. 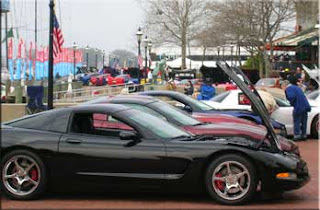 The only bad thing about this show was that I was trying to recover from the worst flu I have ever had. Don't think old JB has been sick in over two years, but boy did I play catch up this week, it has truly been a real bear. So with help of another thousand milligrams of vit C, I think I will be cured in a couple more days!! Thank the Lord.

Next show for the JBO Vette will be the Hampton Annual Corvette Club Show. We will update as to the dates soon. Back to editing, Jim Baugh Outdoors starts it's 2007 annual broadcast April 1st, our 18th year of broadcasting. No wonder I am tired!