Hot Tuna on the Fourth of July!! 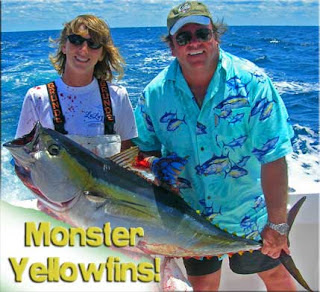 It just does not get any better than this. Monster Yellowfins on the fourth.What a way to spend the holiday. Jim Baugh outdoors left offshore with Captain Jeff Sheepers from Hampton who has placed in several of our Get Hooked On Hampton Rockfish Tournaments that we hold during the fall. Jeff has been wanting to show me just how hot the Tuna bite was right now so we jumped on board with cameras in hand and fished until our arms wore out. 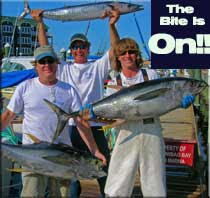 Pretty much all of our baits were fairly standard,and we were using 80 pound fishing line. Our spread was large, 10 rods had been carfully placed and rigged in a quite successful spread. Our first fish was a Wahoo! Boy was I excited. The next hook up a at 50 pound plus Yelowfin. Next hookup was two Yellowfins. My buddy Mike Wilburn fought for about 15 min, and lost him behind the boat, this was a big fish. Tuna in the 60-70 pond class. The day was not complete without landing a nice gaffer Dolphin and we did have one Billfish swim into our spread. Just a fantastic day offshore. 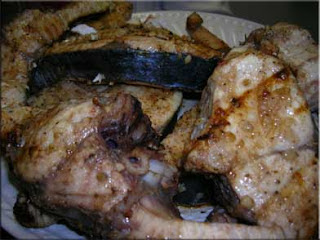 We did produce one excellent show that will air during our 2008 season, the program will also feature how to clean and cook Tuna in a variety of ways.
Once back at the dock, we did do a LOT of cooking, fed a small army. The favorite of course was just fresh cut raw tuna with our favorite sauces. We cut up about five filet's of just raw fish. We also did a great recipe with the Hoo, a grilled Hoo topped off with a Bacon Spinach Florentine, this was just fantastic.
We will follow up with complete Recipes in our Virginia Lifestyles Column and report more on the fishing in the Chesapeake Angler and the Nor' Easter magazines. 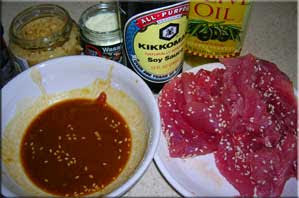 Tight lines everyone, the Trojan boat projects are almost complete for now, and this weekend we are shooting a show on bottom fishing at the Hampton Bar. The fishing is so good in Hampton right now, we are catching 2 pound Croaker right off our docks! 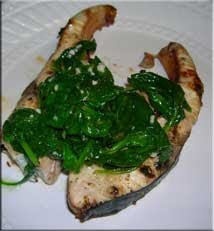