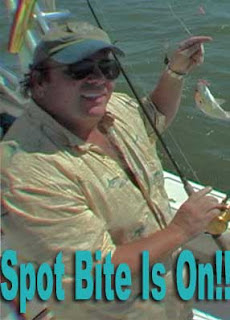 They're Here!!
We have had a real treat this week. First up the Spot Fishing out of Hampton Virginia has been fantastic.The bite has been red hot now for a couple of weeks. I headed out with cameraman Sean Finnegan and ventured out with the twin 250 Suzuki four strokes towards the MM Bridge Tunnel. There were tons of boats anchored and although we usually like to drift for Spot, we decided to try the anchor like everyone else. We did ok, however after a while we started drifting the channel and did a lot better. The baits we used were fishbites, we never used a blood worm, although reports as of today suggest the Spot are preferring the old tried and true live thing.

Spot fishing is always a ton of fun and they taste wonderful If you do not have a boat, you can head out on the Ocean Eagle Charter located right on the downtown Hampton Waterfront. Here is a good JB tip, this week head out to the Hampton Roads Bridge Tunnel and take some Bloodworms, and fisbites and try for the Spot, but also drift Squid strips deep for large Croaker. This is the time of year that the real slabs will migrating out of the Bay. We will head out again in a few days and report back on any big Croaker action. For those of you that have not yet tried the night bite for Rockfish, the season is upon us, and there is no better fishing for Rockfish. We try to plan trips where we will be bottom fishin the late afternoon and then as night falls, get ready with our top water lures for the evening Rockfish bite, all right there at the Hampton Roads Bridge Tunnel!! Cant beat it. To stream one of our Night Fishing Rockfish shows out of Hampton just click the link below
http://jimbaughoutdoors.com/jbpvidstrm/HamptonNightFishing.wmv
BATTLESTAR GALACTICA STAR \Richard Hatch 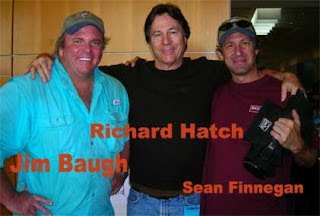 We filmed many locations in Hampton over the past weekend, one such event was the Fantasci trade show located at the Hampton Roads Convention Center. We hooked up with TV star, Golden Globe nominated actor, and author-Richard Hatch of Battlestar Galactica Fame.

Richard was one fantastic fellow who is looking forward to fishing with us on his return visit. Richard told me he loves "Deep Space Fshing" meaning-Offshore. We got a real kick out of that and hope the offshore fishing Will be good next time Richard comes threw. For more info on Richard just log on to his web site at http://www.richardhatch.com/

There is also a cruise that you can book to go along with Richard on, for more info just go to his site. Thanks again to Richard and everyone at the Fantasci Show, it was a great crowd with some fascinating exhibits. For more Convention Center events just log on to http://www.hamponcvb.com/

Well, after shooting the folks from another world, we headed over to film the Disney Ice show called "Disney School Musical" that was being held at the Hampton Coliseum. We could only shoot for a few minutes, but boy, what an ice show!!!

The fans loved it big time. After 6000 screaming kids an 30 ice skaters, it was time to head back to the dock. We are gearing up for the Rockfish season that is about to fire off!!!
For those of you who have not gone after the Spot bite, they are still there!! Go get um!