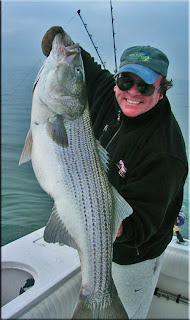 Hello Everyone!!
Things have been a bit busy in Hampton here at Jim Baugh Outdoors Central. We have been filming everyday and the Rockfish bite has just gotten better and better. The time is now to be fishing out of Hampton for Rockfish.
Today the annual Jim Baugh Rockfish Holiday was won by Allen Meetze with a whopping 49 pound monster Rockfish. Allen won a NEW SUZUKI 2.5 HP FOUR STROKE ENGINE- their team also caught a lot of other fish weighing in the 30-40 pound range. Just some awesome catches. Check out this pic of the winning fish, AWESOME!! 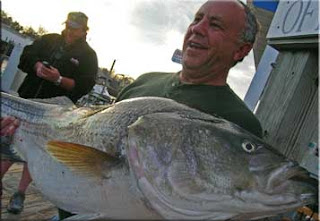 Yesterday I fished with Mike Wilburn and his buddy Jeff, GREAT CREW!!-and we had one catch and release citation, another one close, and one other 30 pound fish!! Jeff's boat was an awesome rig "TIght Lines" was a great ride and that hull raised fish!! Tomorrow we Will also again be live eeling, but with legendary live bait angler and writer Max King with the Chesapeake Angler Magazine. It has been a full week of filming, camerman Sean Finnegan is about wore out! Captain Earl has also joined me all week to get in on this fantastic Rockfishing. Captain earl hails from the Smith Mountain Lake and Gulf Coast areas and his fav is catching monster Rocks out of Hampton.
BOOK your charters today and don't miss out on what looks like the best year of Rockfishing yet-they are just getting BIGGER!!! The weather is fantastic, fishing in 70 degree weather, light winds, it just does not get any better than this. Yall come join us!! 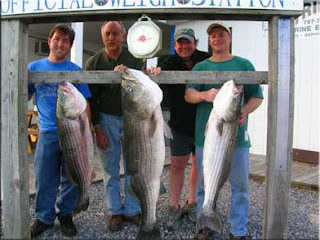 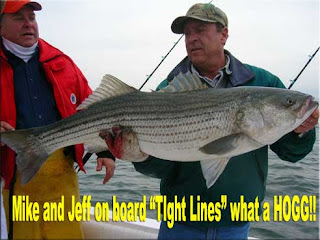