It is Just Getting Better!! HELLO EVERYONE!
I just back in town today and arrived in Hampton around 1pm. Captain Bill called me and suggested we fire up the twin Suzuki 250's and bust across the Bay, try to get on the massive Rockfish bite that was happening! A 55 and 62 pound had been boated and needles to say, I pulled into the first live bait stand I could find and got to the Hampton\Suzuki show boat as fast as I could.
We FLEW to the fishing grounds, baited up, and within minutes I had LOST my first big Rockfish for the day, but that would be the last of loosing fish. Next up Captain Bill lands a whopping 43.5 inch fat Rockfish, what an awesome Rock, only 1\2 inch away from a release citation!!! 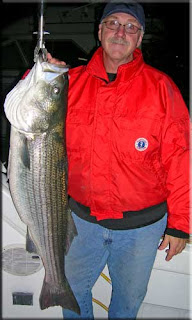 Next up- saw the outrigger line be pulled off the outrigger. ZZZZZZZZZZZZZING!!
This one I landed and was a hungary 34 inch Rockfish. Well it had only been abut 15 minutes of fishing, and we had already limited out, just in time for one fast boat ride back to Hampton. This time of year the sunsets coming down over the Bay coming back from the Eastern Shore is quite a site to see. Tis the season!!
Speaking of, in the picture of Bill and I you can see the Jim Baugh Outdoors 36 Trojan in the background, we decorated her out real nice with Christmas lights this year. The downtown Hampton waterfront during the holiday season is something you have got to see, everything is decorated downtown and just looks fantastic.
Next day on the water is Thursday, it will be an all dayer in search of the new state record!!!
Tight Lines, and yall get down here to Hampton and experience the best Rockfishing in the World!!
Jim B.
PS. Glad you did not run out of gas Mike!
Posted by Jim Baugh at 3:14 PM