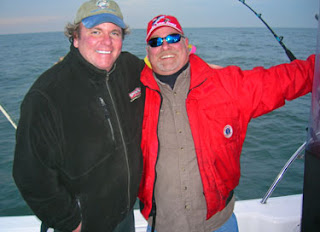 Yesterday I hooked up with JBO Angler Mike Wilburn and captain John for a quick Cape Henry troll. The bite did not take to long, we had a knock down within minutes of setting out our lines. The first hit was on a Mo Jo. 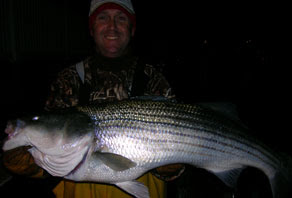 Minutes later, we boated a wonderful 41 inch 25 pound Rockfish. She was a beauty and we were really looking forward to limiting out quick. The next hour we had one through back and then not much else.
I have seen this before, you get on the bite fast, then the birds leave, the sounder has that "Blank" stare, and the action is gone. All the birds were flying east which tells me the bite has moved offshore, past the three mile limit. 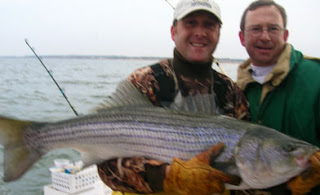 There is not much else you can do, Rockfish can easily move 20 miles per day, so running up and down the beach sometimes is your only option to find fish that are closer to shore. The day was late and we mostly concentrated from the Ramada to the Cape Henry area. We did land one more keeper before the night was out.
All in all, not a bad afternoon of fishing, and we got some good film for the show as well as some fillets for the grill, cant ask for much more than that.
The ocean season is just going to keep getting better and better and the state record will probably be broken again in early 2009. Thanks captain John and crew for a great afternoon of fishing, look forward to fishing the Jan tourney with you folks!! 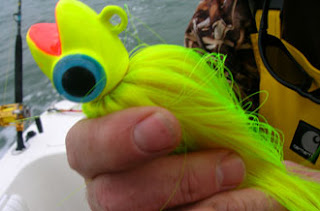 For those of you that live in the Hampton Roads area check out the Daily Press on Christmas Eve. They are doing a feature on Rockfishing and have included some of Jim Baugh Outdoors favorite holiday Rockfish recipes.
Tight Lines and Happy Holidays,
Jim Baugh
Posted by Jim Baugh at 8:52 AM