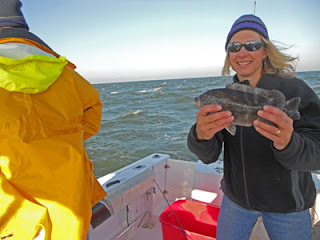 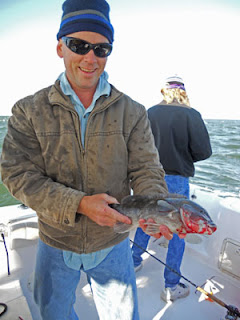 Taug (Tautoga onitis) fishing is something we just don’t do enough of. Since this is getting to be the time of year for the old Taugers, we thought we would hook up with a couple of Taug and Sheepshead Pros who really target the species.

I met up with Larry Regula and Kevin Synowiec along with his wife Beth. We boarded their 24 foot praline and had a nice ride out to the second Island.

There was supposed to be a small craft warning in the afternoon, however it did not wait. As soon as we got set up, she was blowing 22-25mph. The Bay was a rockin for sure, and so were we. 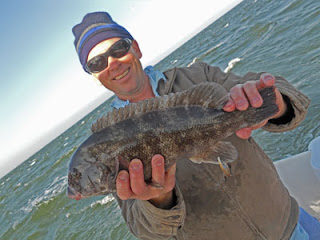 The bite was not hot for either Sheepshead or Taug, however we did manage to pull of some keepers and several through backs on the Taugs. The Sheepshead bite that had been so strong the week prior, was gone for today. 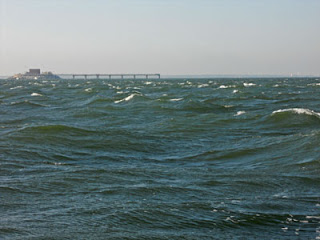 I ask Kevin if he thought the weather just was not conducive for catching these types of fish, he explained that some of the biggest Sheepshead they were catching was on a fast moving tide in fairly rough weather. 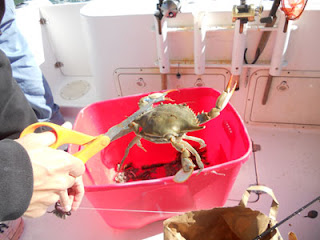 These guys worked very hard for their fish. We fished the tubes at the second and third, and also the pilings towards the high rise. Fiddlers and Blue Crab was the bait of choice. 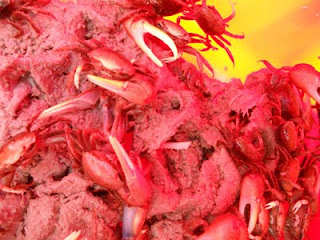 I had gotten up at 3am, met everyone at 7am, and by 3pm in the afternoon we had all decided after what was a fairly hard day of fishing, it was time to head in and catch more another day. Earlier in the week, yes, I busted my knee again riding my bike. So bouncing around all day with a swollen knee meant one thing, and now! Hit the bar at Bubbas in Lynhaven. When we got to Bubbas, the bar was waiting for us, the food was good and the Rum was cold. We were all pretty happy. 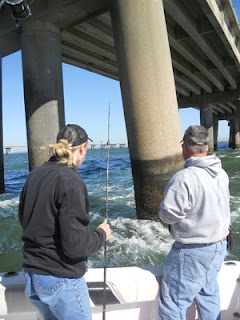 JBO TV will film again with this great crew and the program will air during our 2011 series. Great bunch of folks who really know their stuff when it comes to Taug and Sheepshead Fishing.

Looking forward to our next trip!!!