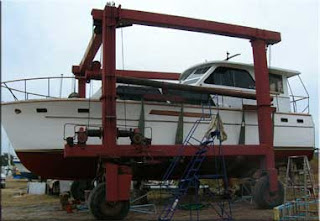 Captain Pete aka "Pirate Pete" of legendary Hampton Blackbeard Festival Fame and member of Blackbeards Crew, has just finished phase one of his renovations on is 1969 Egg Harbour. She is a wooden boat with a 15 foot beam that does require a bit of TLC! Captain Pete sealed every seem on her, and also mat glassed all the seems, resined the bottom, and of course put on a new coat of bottom paint. 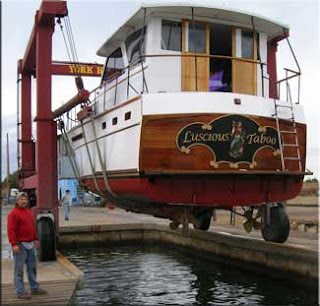 The haul out lasted over two months and Pete and his wife Debbie did a fantastic job on this restoration. Debbie is the Varnish Queen and did most of the brightwork herself. 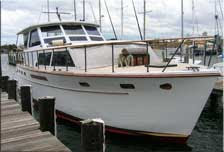 The new stern has even been hand carved and painted.
Other refits now thats she is back in he water include new heads, shower, and even air conditioner system. Pete along with diver Chuck rewired most of the electrical, and the engines fired right up with only one crank. The really sounded good.
Congrads to Captain Pete and Debbie on doing such a fine job on this restoration, she is a pretty boat that has been a float for a long time, almost 40 years!!
JB
Diver Chuck dive site info:
http://www.underboats.com/
Pirate Pete Art Site:
http://www.pyratepete.com/
Posted by Jim Baugh at 9:10 AM