WOW, what a day. Reporting now from Key 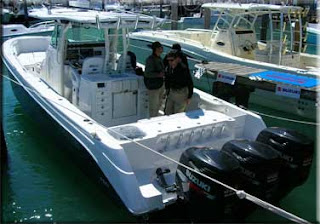 Largo after one exciting day on the water with some unreal Suzuki rigs, we are talking trips and quads. In other words 900 to 1000hp on the back of some rather high performance boats.
It was great to start the day at the Suzuki booth and hook up with Dean, Ron and Terry. It was a bit like going down memory lane. After all, Ron has been with Suzuki for over 20 years, and actualy was my buddy Joes Suzuki Rep when we first started Fishing Virginia TV about 19 years ago. It was cool, the fact that we all had been working with or promoting Suzuki for 20 some odd years!! My how time flies!!
The Suzuki booth was just awesome, great displays, and had terrific traffic. I had a chance to

review with Ron the next show that we both will be doing in a couple of weeks in Greensboro NC. Look forward to that show as well.
What can I say, in southern Miami offshore shooting some of the finest high performance boats in the world, powered by the best outboard power there is, Suzuki four strokes. 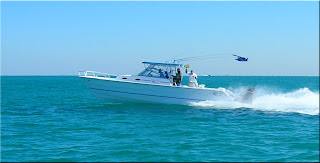 Just look at these pictures, they say a thousand words. I shot video and stills off of a 36 foot Yellowfin powered by triple Suzuki 300's. The featured boat was an awesome Twin Vee powered by FOUR 250 HP Suzuki Four Strokes!!!! This was one of the wildest rigs I have seen, and had the opportunity to talk with the president of Twin Vee Daved East. I have spoken with Dave several times over the years, and it was great to finally meet him. Dave said twin 300's would be an incredible set up for his 36 twin V. 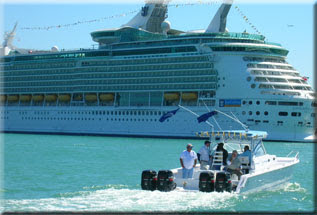 Enough of my talkin, these pics will show what awesome boats these are, we had an excellent day for shooting as well.

Funny thing is that even with four 250 HP Suzuki four strokes, you still could not hear them running at idle!!! What power, and what a boat. Check out Twin Vee and Suzuki, you will be glad you did. 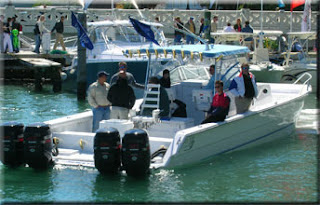 Next report will be from Marathon with my buddy Barry Buchanon. Till then, Tight Lines
Jim Baugh
Posted by Jim Baugh at 3:23 PM