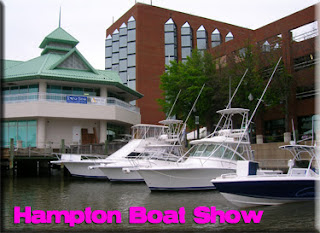 Today is Sunday, the second day of the Downtown Hampton in water boat show. We have truly seen some beautiful boats this year and everyone is having a wonderful time. There was fishing seminars put on by a variety of anglers including legendary radio personality Don Lanchaster. Now this show is where dealers as well as individuals come to sell their boats, and display them in water. The Jim Baugh Outdoors Suzuki\Hampton Show boat is not for sale, but we did set up a promotional display and put on a boat cooking seminar.

We do this each year, it is a ton of fun, and the people at the show just love it. We of course filmed the segments, and they will be a part of our 2008 program series. For this year, I wanted to try some different things, so I called Betcie and ask her for suggestions. Well, first off she ask if I knew the Kentucky Derby was today. I of course did not, but thought it would be a good idea to do one dish that was in honor of the Derby, as well as a good overall dish for the boat show. 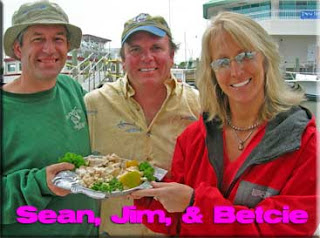 I had told Betz about this Shrimp recipe I came up with while I was down in the Keys. I had made an excellent barbecue shrimp dish, and maybe we could do something with that. She suggested to take my basic recipe and add two shots of Kentucky Bourbon, and add three Mint leaves. Well, I thought this was just a fantastic suggestion and soon went of to the ABC store to fetch some Kentucky Bourbon, because that is the one thing that neither myself, or boating friends had on Hand.
We call this recipe barbecued Kentucky Bourbon Shrimp. This stuff was so good, I could not even get a picture of the actual finished dish, the folks on the dock scarfed it up so fast, I thought I was going to lose an arm!
Here is what you do.

Make a foil boat, one that does not leak, (this proved to be a challenge for JB) then place a bunch of large Shrimp wrapped in Bacon inside the foil boat. Add a cup of wine, some Jerk barbecue sauce, as well as regular barbecue sauce to the boat. Then pour in two shots of Bourbon, add the Mint, and you are ready to go. Close up the foil boat, and bake on grill for 35 min at 350. This without question is one of the best dishes you will ever have. One tip that we figured out, (thanks to Mike) is to pre grill the Bacon before you wrap the shrimp. We will for sure do this next time. 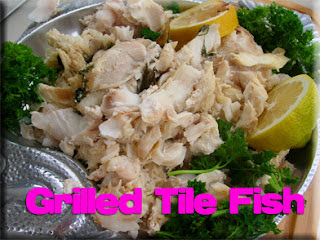 The main feature was just a mess of Tile fish and Sea Bass that we simply put into a foil boat and added fresh Parsley, Lemon, and one Beer. You don't have to worry about the alcohol content, because it cooks out during the bake. That is it, very simple, just put on grill and bake at 350 for about 20 min. or so. Now this is a fine way to fix these fish, but I think next year we will try a Cajun fry for the fine folks at the boat show. Tile fish is a great meaty fish that fries fantastic.
Well, I got to get going, we are still doing the show, and I will be cookin up steak skewers for the crowed here in a few minutes. The weather has been fantastic but heavy winds today. I hope it calms down before tomorrow, we are taking a press tour on board for a Suzuki boat trip threw Hampton Roads, and right now there is five foot seas out there, blown 25 knots!!

Hey a big thanks to everyone who came out to the show, and a special thanks to Sean Finnegan my cameraman, Ethil, and of course Betcie for helping me out with the recipes and for being there. We look forward to seeing everyone at the upcoming Hampton Blackbeard Festival!
Make your reservations today!
JB
Posted by Jim Baugh at 11:36 AM