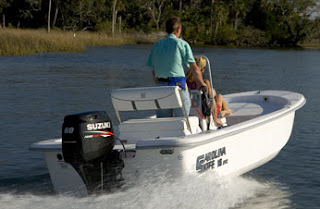 This all-new in-line 3-cylinder outboard will bring a new level of performance, durability and efficiency to a wide range of fresh and saltwater boats. Suzuki's DF60A is the most advanced power plant for everything from pontoon boats and aluminum fishing boats to center console skiffs, bay boats or large RIBs. The DF60A is available in a 20-inch (L) shaft model. In addition, an available tiller handle kit makes this advanced new 4-stroke an even more versatile choice for avariety of boating and fishing applications.The introduction of this newest Suzuki 4-stroke follows last year'ssuccessful launch of second-generation 70/80/90 horsepower models that offered boaters significant improvements in size, weight and fuel economy. "We are committed to providing the most advanced technology to the greatest number of boaters," says Larry Vandiver, Marketing Director for Suzuki Marine. "The DF60A is the logical next step as we continue developing motors that are lighter, stronger and more efficient in every horsepower class. We strive to make each new model not only superior tothe competition, but even better than the Suzuki 4-stroke outboard itreplaces."

With the new DF60A, Suzuki engineers hit the mark in a variety of ways,beginning with a new Dual Overhead Cam (DOHC) 12-valve power head with 941cc displacement. Because each of the 12 valves are controlled directly by the camshafts, rocker arms (and their need for periodic adjustment) are eliminated. As a result, DOHC design provides enhanced reliability and cuts down on maintenance. Drawing on its vast experience in 4-stroke engines for motorcycle, automotive and marine use, Suzuki was able to develop an outboard that is the most compact and lightest in the class (229 lbs.) All while providing boaters with ahigher level of performance and fuel efficiency.

Compared to the 60HP 4-stroke it replaces, Suzuki's testing has demonstrated this model will run approximately50-percent farther on each liter of fuel at trolling and cruising speeds- and an impressive 30-percent farther at wide open throttle. Fuel consumption per hour for Suzuki's new DF60A was tested to be about40-percent less at trolling speed, 45-percent less at cruising speed andstill a significant 20-percent less running wide open. Suzuki's latest 4-stroke offers several firsts for the horsepower category, including Suzuki's self-adjusting, oil bathed timing chain that's virtually maintenance free. The DF60A incorporates a trim and tilt limit system that protects boats from possible damage when tilting the outboard. This unique design functions as both a tilt limit and trim sender and uses a step-free continuous type tilt limiter. This allows the DF60A to be installed with confidence on nearly any type ofboat. To deliver the charge today's boater needs, Suzuki's designed the newDF60A with a large capacity 19A alternator. Specially engineered to generate 11.5A at only 1,000 rpm, this alternator keeps batteries charged and lets boaters run a full array of fish finding and navigationelectronics. The DF60A also features a specially formulated anti-corrosion finish applied to directly to the aluminum surface for superior protection and long-term operation in saltwater environments. For more information on the new Suzuki DF60A 4-stroke outboard for 2010- or the company's leading line-up of advanced 4-stroke outboards from2.5 to 300 horsepower, contact Suzuki Marine at (714) 996-7040 or visitonline at http://www.suzuki.com/.
Posted by Jim Baugh at 7:04 AM