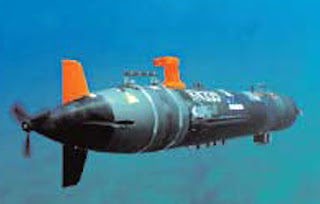 Submarine Alert! Boaters Beware.
The Navy is still looking for four missing unmanned subs that were somewhere near the Thimble Shoals Channel and the Bay Bridge Tunnel. Running into one of these things on your boat could ruin your Flounder trip REAL fast. Be careful boaters. Can you imagine Spadefishing at the TS Lighthouse and hookin into one of these things?? I wonder if they like Clams.
Navy, please find these things.
Thank you
JB
PS: Would make for one great pool toy.
----------------Full Story
By Lauren KingThe Virginian-Pilot© June 8, 2010
UPDATE: The Navy said that as of 2:45 p.m. Tuesday, a search was still under way for the missing mini-subs.
NORFOLK
Four underwater unmanned vehicles went missing Sunday during training to conduct search, classify and map missions.
The Navy, Coast Guard and local authorities were searching for the missing vehicles in the Thimble Shoals Channel between the Hampton Roads Bridge-Tunnel and the Chesapeake Bay Bridge-Tunnel, a Navy news release said.
Communication was lost with four of the 13 unmanned vehicles Sunday about 1 p.m. while the vehicles were using bottom-mapping sonar to look for mine-like contacts in the water as part of the training. Search and recovery operations began immediately.
Efforts continued Monday using small-craft, shore-based teams, air assets and marine mammal systems, which could include sea lions and dolphins trained to hunt mines.
The cause of the vehicles’ disappearance is under investigation. The missing vehicles do not pose a danger to civilians or the environment, the Navy release said, but if an unmanned vehicle is discovered floating in the water, boaters should avoid it as they would any other navigation hazard.
If one of the missing vehicles is found, please call the U.S. Second Fleet commander at (757) 443-9821.
The unmanned vehicles were being used as part of a larger training exercise with about 2,500 personnel from Canadian and U.S. military forces and government civilian agencies. The annual training exercise will continue through Friday.
Posted by Jim Baugh at 5:16 AM