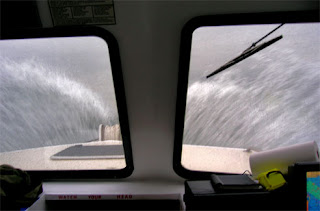 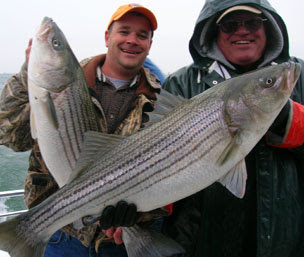 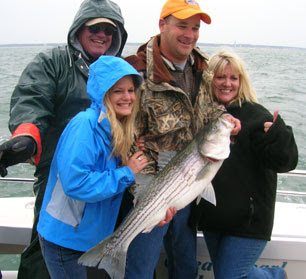 WOW! What a day yesterday. We left out of Hampton VA in search of the Monster Rocks. These pictures say it all. We fished with our friend Captain Steve Wray for the first time on his new awesome Evans for Rockfish on one snowy cold day. This was the last day of the Frostbite Challenge Rockfish tourney and the weather was better today than the previous two days. JBO Angler Mike Wilburn and crew fished both Friday and Sat. and had to literally take mallets to knock enough ice off the boat to head out and be safe. Everything froze on the boats once out to sea, the rods and all equipment had to be cleared of frozen salt water.

Today was not as bad, and captain Steve had the cabin so warm with heat you would of thought you were in Key West. It actually was quite comfortable, and the curtains off the back of the boat helped as well. We did get snowed on while fishing and it was fantastic. Hauling out Rockfish in the ocean while it is snowing is just an awesome experience. 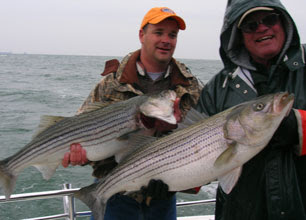 We had a great crew on board, and a bunch of fun folks from SC joined us. They came up and duck hunted on Sat. then fished with us on Sunday. They were a hoot, and just could not get over our awesome fishery up here. Everybody was here this weekend. Even Bill Dance was here getting in on the action. It is about the best in the world, and some of my favorite fishing is yet to come-Deep Droppin for MONSTER Sea Bass. Coming up in the next couple weeks. 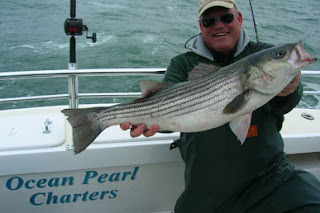 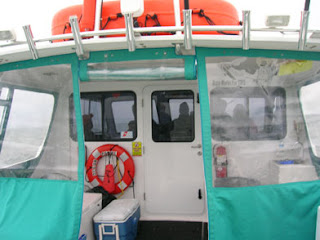 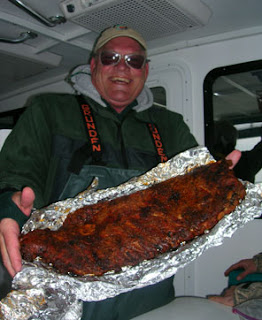 I have always thought that the fans of Jim Baugh Outdoors TV were the best in the world, and they are. A fellow who had followed our show since our beginning 20 years ago was on the charter, his name was Ted Jensen. I had never met Ted before, but I sure am glad I did. Now Ted is quite a character and a great fisherman. Every time Ted would tell a "Story"-a fish would bite. They were some stories too I'll tell ya! Big Ted was so kind, he brought me a full rack of ribs for lunch, I was floored. The guy was so nice, and these ribs were about the best I have ever had. He had brought me these ribs all the way from Chef Hog BBQ, and it is about the best real southern BBQ you will ever have. (540-786-1354) Before I left that day old Ted gave me a bag of Rockfish as well. I left with a rack of ribs and fresh Rockfish. One of my better days for sure! Thanks guys, it was phenomenal!!

I get ask almost everyday about taking people out for Rockfishing, and JBO TV is not a charter business. We highly suggest that you contact our fleet of captains here in Hampton VA, just log on to our charter page at
http://www.jimbaughoutdoors.com/HamBoat%20Charter.htm

Or contact some of our many friends nearby like Captain Steve. Here is his contact info. This time of year, we will start to see a lot more 50 pound+ being caught. If your going to bring your family and kids, you want a protected boat, captain Steve's is one of the best. Give him a shout at -
757-481-7517
captstv@yahoo.com
Captain Steve Wray, Ocean Pearl Charters
http://www.longbaypointebaitandtackle.com/
http://www.longbaypointemarina.com/index.htm

Yall come get on these fish!!! Time is NOW!! 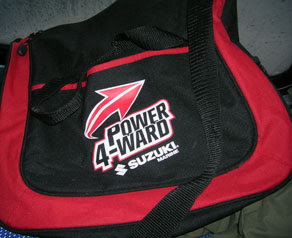 http://www.suzukimarine.com/
Posted by Jim Baugh at 7:36 AM